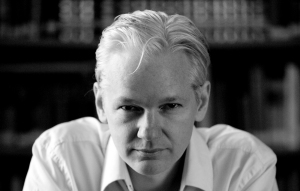 It was set to be an illuminating online conversation with one of the world’s most controversial figures.

But Al Jazeera’s livestreamed talk with WikiLeaks founder Julian Assange was cut short on YouTube Thursday, inexplicably the victim of a copyright claim by NBC Universal.

Visitors who tried to watch the talk, hosted by Al Jazeera’s The Stream, were greeted with the message “This video contains content from NBC Universal, who has blocked it on copyright grounds.”

It’s unclear what, exactly, that’s supposed to mean, as NBC Universal and Al Jazeera are separate companies. The Stream tweeted to the Daily Dot that it “was an automatic block by YouTube which we’re disputing.” NBC Universal didn’t respond to multiple requests for comment.

We need a real recovery. That’s what Mitt Romney said during the campaign, and he was right. Five years since the start of the Great Recession, unemployment is still far too high. It’s not for a lack of optimism among policymakers. As Evan Soltas pointed out, the Federal Reserve keeps predicting that prosperity is just around the corner, only to find it’s not. Catchup growth is the new Godot.

More and more Americans are concerned about the situation in civil-war ravaged Syria, according to a new national survey.

Federal Reserve chairman Ben Bernanke used the term “fiscal cliff,” it quickly became the newest Washington buzzphrase. As the deadline to avert the cliff nears, it has overtaken the European debt crisis as the most talked-about story in the financial media. The fiscal cliff refers to the enactment of a number of laws that would, if not changed before Jan. 1, 2013,

President Barack Obama handily defeated Gov. Mitt Romney and won himself a second term Tuesday after a bitter and historically expensive race that was primarily fought in just a handful of battleground states. Networks project that Obama beat Romney after nabbing the crucial state of Ohio.